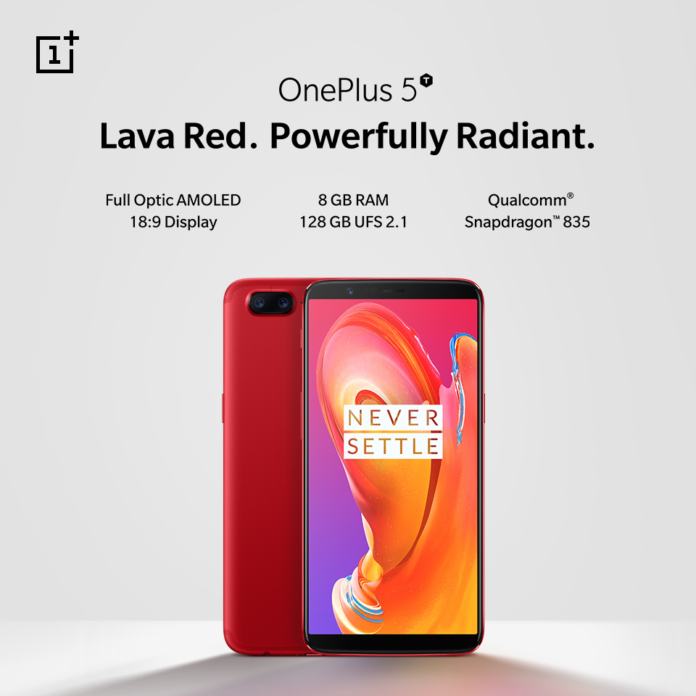 OnePlus has launched the Lava Red edition of the OnePlus 5T with a price tag of Rs. 37,999. This is the fourth variant of the smartphone after the midnight black, special star wars edition and the latest sandstone white. As of now, the device is listed on the official website of OnePlus and will go on sale on January 20 at 12 P.M on Amazon India’s website.

On the date of the launch of OnePlus 5T Lava Red edition, Samsung will also start selling the Galaxy A8+ in India. The Galaxy A8+ will be a direct rival of the 5T.

The device will be available in the 8GB option as of now. The registration for the sale of the device has already begun. 5T is the first phone by the OnePlus to get a red color skin.

According to OnePlus the new variant of the 5T undergoes a two anodic oxidation process, double blasting and AF coating which gives it a certain texture. The device also gets a special and new wallpaper to match the Red skin of the device.

Other than the skin the device is identical to the 8GB variant of the midnight black. It contains a 6-inch optic AMOLED display leaves out narrow bezels on all four sides on the device. The device has 80.5 percent screen-to-body ratio. The company managed to place all the sensors and the 16 Megapixel camera above the display. The device has Gorilla Glass 5 for protection. The screen of the device is equipped with Sunlight Display which adjusts to the ambient light and activity to create optimum viewing experience.

Processor and performance of the 5T is unmistakably awesome. It is powered by an octa-core Snapdragon 835 chipset clocked at 2.45GHz coupled with Adreno 540 GPU. The cameras of the OnePlus 5T are also good. The OnePlus 5T camera has been touted as a low-light expert and that might be true considering that the primary camera comes with aperture of F/1.7. Within the dual-camera setup, the device houses one 20MP sensor and another 16MP module.

OnePlus has improved the dual camera for the portrait mode. The new 5T will also comes with refined Electronic Image Stability (EIS) for better video and image stabilisation.

The device has face unlock feature too and according to the company it will unlock the device in just 0.4 seconds. On the connectivity front, the device has a USB 2.0 Type-C jack and a 3.5mm audio jack. The device also has an accessible Alert slider to toggle between three notification settings- Ring, Do Not Disturb and Silent.