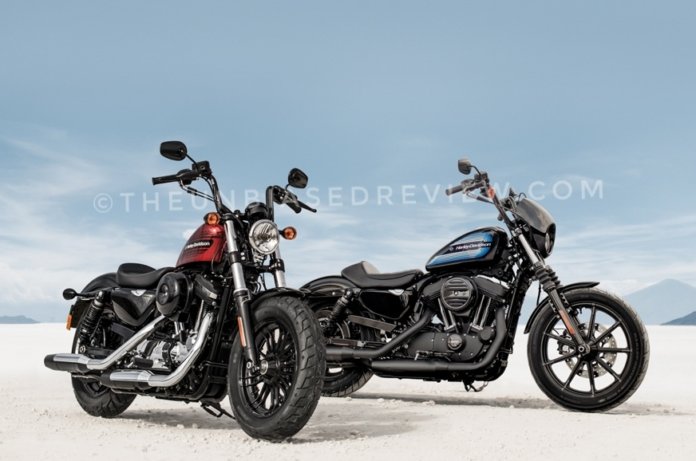 Harley-Davidson has added two new motorcycles to its Sportster line-up- Iron 1200 and Forty-Eight Special. These new Sportsters combine throwback styling trends with the Sportster platform and the Evolutionary 1200 V-Twin engine.

The Harley-Davidson Iron 1200 comes with a raised handlebar. The handlebar is 812mm wide. The motorcycle also comes with a 165mm pull-back, which results in a more upright riding position. Unlike the Iron 883, the Iron 1200 has a new cowl around the single headlight. The bike comes with a single seat and a 12.5-litre fuel tank. ABS and the Harley-Davidson’s Smart Security System(SSS) are available as factory-installed optional extras on the US-spec models.

This motorcycle gets a beefier front-end, with its 130mm section front tyre and 49mm diameter fork. In the front there are large aluminium triple clamps which add a sort of chunkiness. The Forty-Eight Special also has a tall handlebar but it is shorter and also has less pull-back when compared to the Iron 1200.

The Special uses the same motor as the new Iron 1200 does and it’s bottom-end, gearbox, and exhaust system is covered in chrome. The Forty uses the Harley’s famous “peanut” fuel tank with a capacity of 8.3 litres. The wheels on it are 16-inch nine-spoke alloys both for front and rear.

Now the most important thing, Whether these two motorcycles will come to India or not? This decision is currently under consideration, but we see strong chances for at least the Iron 1200 to make it to India as the new entry point to the 1200 range in the Sportster family.