Xiaomi India today launched the successors to its Redmi 5 lineup — the Redmi 6, Redmi 6A and the Redmi 6 Pro. The Redmi 6 is priced at Rs 7,999 while the Redmi 6A and Redmi 6 Pro are priced at Rs 5,999 and Rs 10,999 respectively. The phones will be available on Mi.com from 11th September. Xiaomi in the launch event mentioned that it might increase the prices after a couple of months if the Rupee keeps depreciating against Dollar.

HDFC is providing a discount of Rs 500 during the first sale of Redmi 6 and Redmi 6 Pro with debit and credit cards. 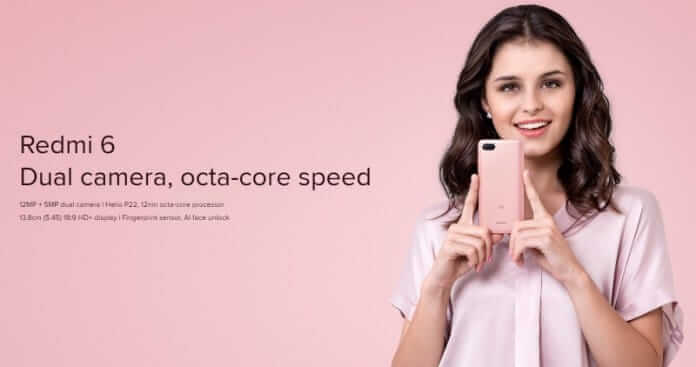 The Redmi 6 sports a 5.45-inch display with a 1440×720 pixels resolution. The screen has a pixel density of 295 ppi and is powered by an octa-core Mediatek MT6762 Helio P22 processor with Cortex A53 CPU clocked at 2GHz and PowerVR GE8320 GPU. It comes in two variants, one is a 3GB RAM with 32GB internal storage variant and another is 4GB RAM with 64GB internal storage. The storage can be expandable upto 256GB via a MicroSD card and is backed by a 3,000mAh battery.

The phone runs Android Oreo 8.1 based MIUI 9 on top.

The Redmi 6A is a stripped down version of the Redmi 6, featuring the same screen, software, dimensions and colour variants, but different processor, camera and RAM options. The Redmi 6A is powered by a quad-core MediaTek Helio A22 processor clocked at 2.0GHz. It also comes in two variants, one with 2GB RAM with 16GB of internal storage and other with 3GB of RAM with 32GB of internal storage. The storage can further be expanded by a microSD card slot. 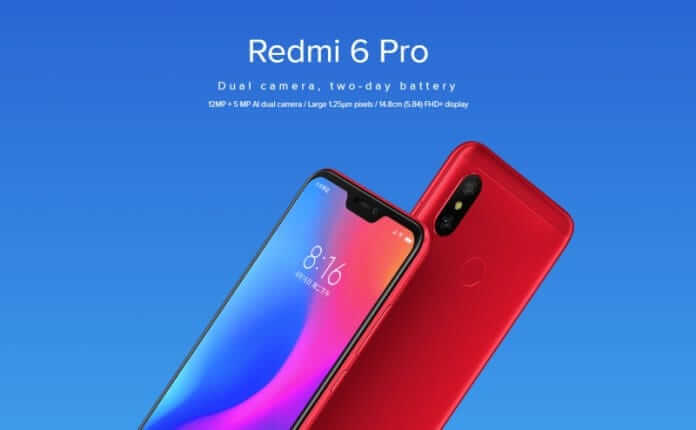 The Redmi 6 Pro is a rebranded version of the Mi A2 Lite launched in Spain. The Redmi 6 Pro features a 5.84-inch LCD display with a notch and 2280×1080 resolution. The Redmi 6 Pro is powered by Xiaomi’s favourite octa-core Qualcomm Snapdragon 625 processor clocked at 2.0GHz. It also comes in two storage variants, one with 3GB RAM and 32GB storage and other with 4GB of RAM and 64GB of internal storage. It runs on Android Oreo 8.1 with MIUI 9 on top. It is backed by a 4,000mAh battery.

In terms of optics, the Redmi 6 Pro comes with a 12MP+5MP dual rear cameras with an aperture of f/2.2 while on front it comes with a 5MP camera with f/2.0 aperture.