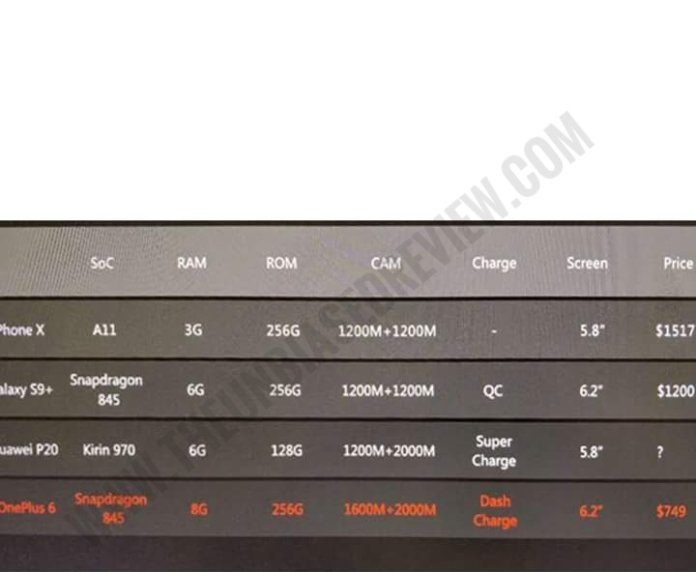 Launched in November’16, OnePlus 5T is the first flagship device from company to sport an 18:9 aspect ratio display. From last 1 month rumors are coming about the OnePlus 6. It is expected to feature higher screen-to-body ratio of around 90 percent through its 19:9 aspect ratio supporting notched display. It will be powered by latest and highly potent Qualcomm Snapdragon 845 chipset and improved cameras. A leaked photo that has surfaced today has revealed the not only the key specs of the OnePlus 6, but also its pricing.

Image suggests that the OP6 will be fueled by Snapdragon 845 and it features 8GB of RAM and 256GB of storage.

The OnePlus 6 houses a 6.2-inches display. It is equipped with 12MP + 20MP dual camera setup and it carries the Dash Charge technology. The OP6 is listed with a price tag of $749 ( approx Rs. 48,846.04). However, compared to other flagship phones with similar specs (but different chipsets), the pricing of the OnePlus flagship seems reasonable. Though it is nearly Rs.10,000 more than the 5T.

A leaked photo that had appeared at the beginning of this month had revealed that the OnePlus 6 will be arriving with a notch at the front. The image had also revealed that it features 64GB of storage and 6GB of RAM. It is equipped with latest Android 8.1 Oreo that will be customized with the latest OxygenOS skin. Some rumors have claimed that the OnePlus 6 would also be equipped with some new and exciting features like in-screen fingerprint scanner and 3D facial recognition. It is also speculated that it will include support for super-fast LTE gigabit connectivity. As far as the launch date of the OnePlus 6 is concerned, it is expected to launch in June, this year. However, nothing is official yet, and hence, it is advised to digest this report with a pinch of salt.