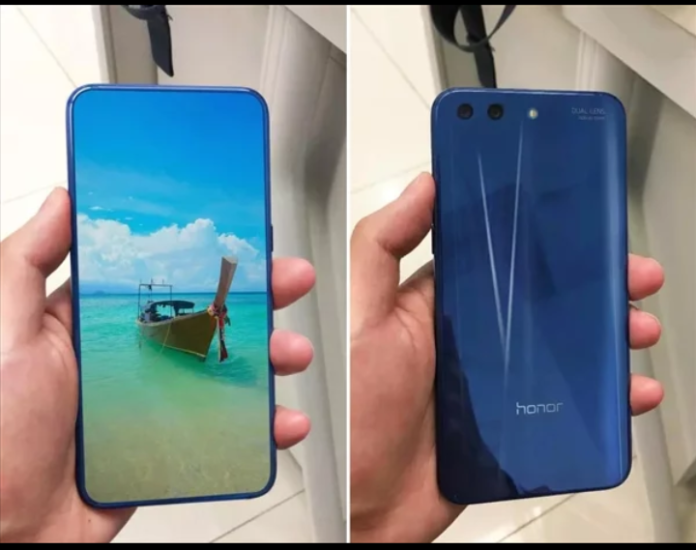 Huawei‘s sub-brand Honor has already scheduled a launch event on 19th April, where it will be launching its new smartphone, Honor 10. Ahead of the official launch, images of the smartphone have leaked online.

The leaked images show the device’s front and rear sides. Going by the images, the phone will come with a full-screen display similar to Huawei P20 lineup. In a teaser image the company claimed that the Honor 10’s display offers 100 percent screen-to-body ratio which sounds too good to be true.

At the rear, there’s a dual camera setup placed at the top-left corner along with an LED flash. The newly surfaced images show the gradient back panel.


A few days ago, the images of the Honor 10 surfaced on chinese social media in which the device was seen in the hands of the popular Chinese actor and singer Hu Ge. Previous leaks of the phone showed that it will come with a notch display and a home button on the bottom with integrated fingerprint sensor.

Some leaks also suggest that the smartphone could be powered by the company’s own Kirin 970 chipset. The phone is expected to sport a 5.8-inch display and will pack 6GB of RAM. The high-end variant of the handset will come with 256GB of internal storage.

The camera sensors will come with the Artificial Intelligence (AI) technology to improve the captured images. The device is likely to be running on Android 8.1 Oreo operating system with the company’s own AI-based EMUI 8 skin on top. It is also expected to come with IP67 certification, ensuring waterproof and dustproof build.

Like the earlier Honor branded flagship phones, the Honor 10 is likely to arrive with slightly higher pricing. After launching in China, the company is also expected to launch this smartphone globally during an event that is scheduled to take place on 15th May in London.

Asus out with the first ever convertible gaming laptop.