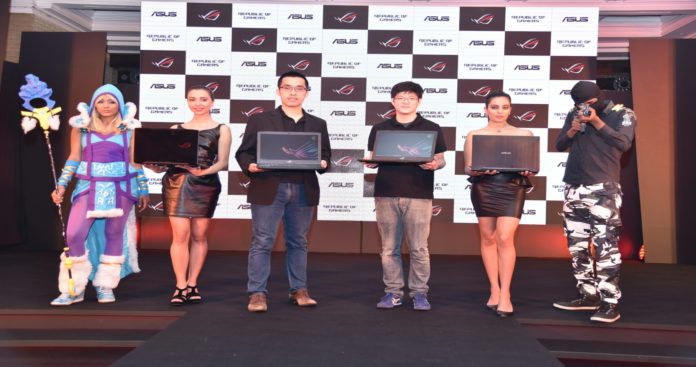 REPUBLIC OF GAMERS (ROG) is a sub-brand of ASUS, which is dedicated to creating world-class gaming hardware and software.

Asus also unveils ROG STRIX HERO EDITION series, built for the fearless multiplayer online arena battle (MOBA) games such as Dota 2, league of legends. Along with this company also unveiled ROG STRIX GL503. It has a display of 15.6 inches with as thin as 2.3 cm profile. It is measured at 2.5 kgs.

The ROG Strix star edition is powered by latest Intel Core i7 processor and equips FPS fighters. It is supported by the graphics card of NVIDIA GeForce GTX 1070 series with a desktop-style keyboard layout and a super fast 7ms, 144 Hz display. The scar edition upgrade’s gamers vision and delivers smooth and accurate visuals which eliminate motion blur. Strix Scar Edition will be available with up to 120 Hz display with a 5ms response time, soon.

This edition is powered by Intel Core i7 processors along with NVIDIA GeForce GTX 10 series graphics. It is armed with Windows 10 and delivers you rich colour, 120 Hz wide-view IPS display. It also has desktop-style keyboard layout and a 20-million-key-press lifetime reliability. This edition has unique sharp-lined styling, blue colourways and Mayan patterns. The IPS display provides 100% RGB value combos, improved contrast and colour accuracy. The display allows the gamers to view at an extreme angle of 178° both vertically and horizontally.

It gives amazing control at the fingerprints with a brand new keyboard layout. It features four hotkeys and four RGB-backlit zones (customizable). ROG over stroke technology enables earlier actuation and a longer over-stroke distance for fast, effortless and accurate keystrokes. This edition has 0.25mm deep keycap curve which is comfortable to touch. It highlights WASD keys and N key rollover. Further guaranteed for 20 million key presses. It is equipped with dual 12V fans to automatically adjust the cooling system.

These all-new revealed gaming series will be available from 20th December in India in various online and offline stores.