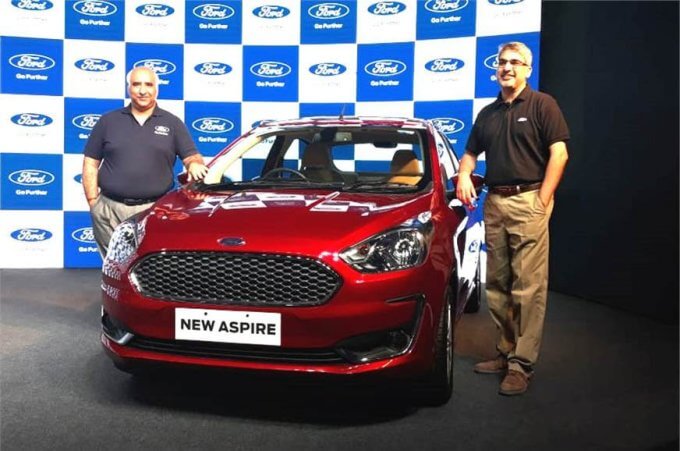 Ford India has finally launched the much anticipated 2018 Aspire facelift in India. The facelift is priced from Rs. 5.55 lakh to Rs. 8.49 lakh (ex-showroom, Delhi). The car has received this level of upgrade after three years from the launch. Touted as one of more good-looking and well-equipped offerings in the subcompact sedan, the 2018 Ford Aspire facelift comes with relevant cosmetic updates along with a host of new and updated features. Apart from cosmetic changes the facelift now offers two new petrol engines. Here are some of the key features that the 2018 Ford Aspire facelift brings to the sub-4-metre sedan space.

The 2018 Ford Aspire comes with considerable cosmetic updates like, a new grille with optional silver treatment and chrome surrounds, redesigned headlamps with a new cluster and mild smoked treatment, a new bumper featuring an edge-to-edge black design,a new wider airdam, round fog lamps and C-shaped chrome inserts on either end.

The ORVMs have also been updated and it now features a set of new larger multi-spoke 15-inch alloy wheels. The taillamps have also been slightly tweaked, adding more style to the facelift.

In terms of interiors, facelifted Aspire comes with a similar beige and black color tone. The seats on the facelift have been re-designed to offer better lumbar support. The car also gets a redesigned dashboard featuring a new 6.5-inch touchscreen infotainment touchscreen which is a floating unit similar to the ones on the EcoSport and Freestyle.

The air-con vents have been repositioned and the car now also gets lesser buttons and knobs for in-car controls.

In terms of safety, the car has dual front airbags and ABS with EBD, rear parking sensors, and seatbelt reminder for driver and front passenger as standard across the variants.

The 2018 Ford Aspire, like the pre-facelift model, will come with two petrol and one diesel engine option. Both the petrol engines are from the new dragon series – the 1.2-litre three-cylinder motor unit is carried from the Freestyle, while the 1.5-litre three-cylinder unit was carried from the EcoSport facelift. The former 1.2-litre motor makes about 95 bhp of power and 120 Nm of peak torque, while the bigger 1.5-litre unit churns out 123 bhp and 150 Nm of torque. The 1.2-litre unit comes with a 5-speed manual gearbox as standard, while the 1.5-litre unit comes equipped with the 6-speed torque converter.

The diesel variants of the car will come with the same 1.5-litre TDCI engine that powered the predecessor. The 1498 cc, four-cylinder motor makes 99 bhp at 3750 rpm and develops 215 Nm of peak torque between 1750 to 3000 rpm. The diesel engine comes paired with the same 5-speed manual gearbox as standard.